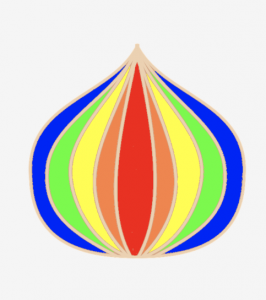 The cultural onion is a metaphor or model for the pictorial representation of culture. The model was developed by cultural scientist Geert Hofstede.

Hofstede describes culture as an onion consisting of different layers. The outer layer corresponds to the cultural characteristics of people. This layer means the so-called symbols. Symbols are words, gestures, pictures or objects that have a certain meaning, which is only recognized as such by those people who belong to the same culture. As simple examples of symbols can be mentioned the hairstyle, clothes or flags. In addition, other markers can occur that are also ‚visible‘. These include language, gestures and facial expressions. Symbols are not fixed, but are subject to change over time. Symbols of specific cultural groups influence each other.

The next layer in Hofstede’s onion model is heroes: „Heroes are persons, dead or alive, real or fictitious, who possess characteristics that are highly regarded in a culture; they therefore serve as models of behavior.“ (cf. Hofstede 2001, 8) Examples of heroes from American culture may include former President John F. Kennedy as well as comic book characters or television personalities such as Batman, Rocky, or Rambo.

The third and penultimate layer in the onion model is called rituals. Hofstede describes rituals as „collective activities that are actually superfluous to the achievement of desired goals, but are considered socially necessary within a culture“ (cf. Hofstede 2001, 8). Examples of rituals include gestures of greeting or acknowledging another person as well as social and religious customs. These include oral greetings such as hello, moin, or servus in the German language, as well as physical greetings in the form of shaking hands.

The first three layers are visible to an observer, although their significance for the culture cannot be readily inferred by the observer. These three layers can be grouped under the term ‚practices‘. Practices can be easily imitated by outsiders, but the meaning behind the actions is usually not perceived.

The core of the cultural onion is formed by values, which are described by Hofstede as „general tendencies to prefer certain circumstances“ (cf. Hofstede 2001, 9). Values are also defined as feelings with a strong positive or negative orientation. In child rearing, values play a special role because they are among the first contents that the child learns in his or her life. Most people are not aware of their values because they are learned early in life and unconsciously. Moreover, they are used daily, which also contributes to their subconscious use.